I don't remember when was the last time i wrote about the ugly side of people, or when was the last time i was upset about it. Honestly, i had known well enough n good enough not to be upset, but this time, it is different, because i had never thought he would even twist the fact to people whom i also know. I am now even making sure that i am not writing in abbreviations, because this fellow cant even spell properly.. and he might even read this, and i do hope he does too!

To cut the story short - i will just put dwn the facts then. And in fact, i am going to be brutally honest about what i feel then.
- I initiate the break-up
- i prefer my man to be clean shaven & clean looking
- he is too immature
- he thinks he is the best dancer in belfast (in 2007)
- he thinks he knows everything in this world
- the relationship was only about 2months
- broke up with him about 1-2 weeks after valentines day 2007
- i was already bored, frustrated, can't stand him before valentines
- i LIED to him about the reason for the breakup
- its NOT because i was stil in love with Willy
- No one who is smart, will say bad or negative things about his teammates, unless you want to
be out of the team.
There are lots of other things that happened after the breakup, but i don't have to go into that.
I might have said these to Channey & Rebecca, but not to anyone else in the dublin salsa scene. But of cos now, i am blogging it, which also means openly, to whoever is reading this.
When i remain silent, it doesn't mean that you can bully me, in any way that you think you can.
Do not even ever try again, to say things that are not true.
Do not say anything when you don't even know anything about it.

And honestly, calling yourself as sexym@#%#, i think it is the funniest joke ever!
A lot of people think the same way as I do, fyi.

Tampere - my 2nd experience of couchsurfing, With Heikki (the guy with specs) & Jonna 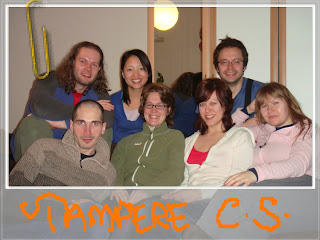 Brought me to the frozen lake, and you can actually see how thick is the snow then.
I think this is very cool n amazing, when we're actually walkin on the lake! i can imagine looking upon the same lake, in the summer. tat is awesome!

Lots of pple went to the lake, skating, skiing, with their dogs, kids with their sleighs, sleds.. ther's also a mobile cafe at the middle of the lake where we got our hotdogs & my hot chocolate. This whole lake is so big that it actualy felt lke i was @ the snow desert. ;) 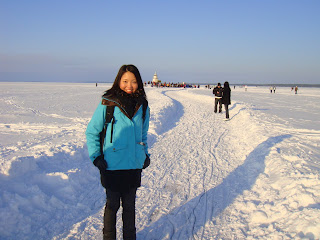 This is Jonna, Heikki's galfren. Had a great time with her, although it was heikki whom i wrote to in couchsurfing. ;) A very patient, fun, chatty gal! 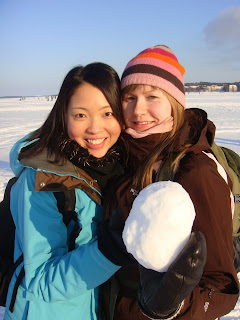 Walking through the 'snow desert' to the Sauna plce, which is kinda at the other end of the lake. i think we were walking through the lake for prob 30mins. It is really no joke to walk on the snow!! Wel, its really a form of good exercise, Jonna said its gd for the calves. ;) 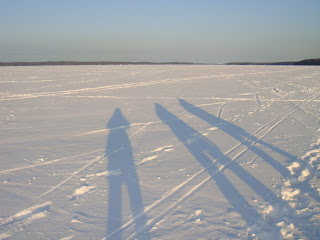 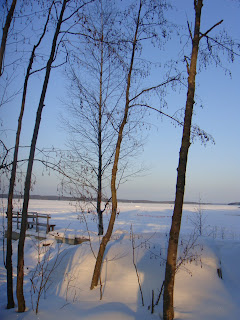 The biggest adventure / challenge of my life so far!!! Jumping into the frozen lake!!!
And i am totally proud of myself cos i did it 3 times!! !! !!
I was hesitant initially honestly, when jonna & heikki asked me if i can dip into the pool when we were in the sauna. I thought to myself, " wel, this is prob / mayb goin to b my 1st & last time to hav that experience, so just do it!" Out in the snow frm the sauna only with my bikini, it didnt feel tat cold, and i was holding onto Jonna's arm while walkin to the pool. After my 1st dip in the pool, i was sure that i wouldnt want to do it again. But when we were in the sauna the 2nd time, and it was time to get out of the heat, Jonna asked again - "Do u want to go to the pool or do u want to try to rol on the snow. I prefer to roll on the snow." Rolling on the snow with my bikini, u must b kidding! So i opt to go into the pool again! and nw, it was fun! so in the end, i dipped into the frozen lake 3 times, instead of once. LOL
So Pat on my back!! Heikki & Jonna were proud of me too! :) 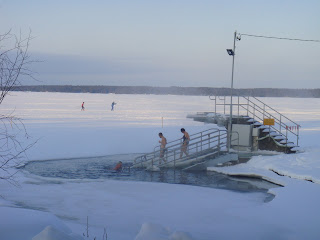 Just a couple of pics of helsinki, for nw, as these are frm my digital camera. Hav not upload my pics frm my baby yet! 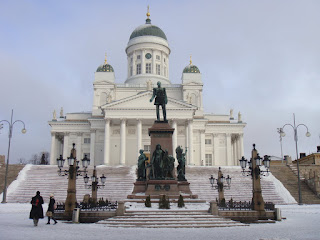 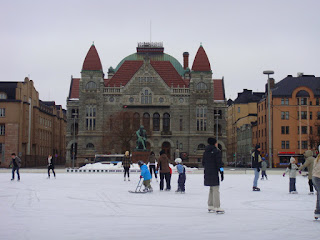 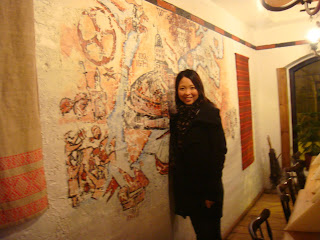 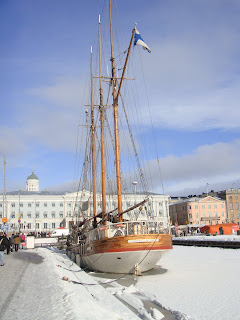 Spent a day in helsinki on my own, walked around the city with the map, and its really easy to walk ard on yr own. just like wat the lonely planet book said. ;)
Went to have a buffet dinner at a local restaurant which is recommended by the book, tried the reindeer meat! ;) Taste like a little like pork n beef.. wel, its not too bad honestly.
Then, also went for a sauna which is also highly recommended by the book, so went to check out the plce. It is great, but didnt take any pics of it, as all of us who were at the sauna, were naked, ;)
A really gd experience overall in helsinki, having the time n space of my own to do wat i want.
Posted by destiny at 8:54 AM No comments:

Finally hav the chance to update my blog! Was working on a week of nights right after i got back from finland! :) 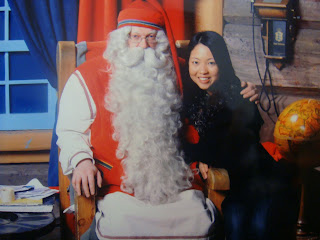 This is my couchsurf host in Rovaniemi, Pia ;) 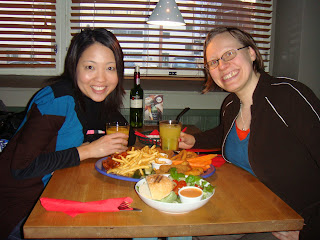 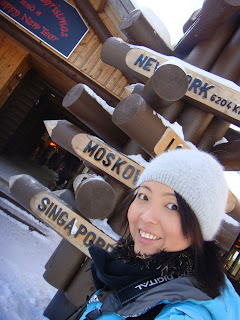 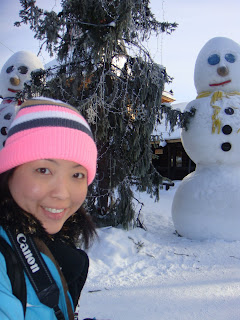 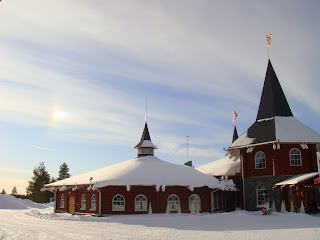 This is actually a shop gift house. took this pic boc of the 'sun' :)
Posted by destiny at 10:57 PM No comments:

Very soon, my 5days in finland is coming to an end, but i am already feeling that i can live in the freezing cold.

My first 2 nights were spent in Rovaniemi, with my couchsurfing host, Pia. A lovely, friendly, warm lady who made vegetable soup for me on the day i arrived on the train from tampere. Although her plce is a little messy, but its the artsy, bohemian style of mess, that i think its reali cool & i believe that i will b kinda like tat too, if i was to continue on being an Arts student, i can see a little bit of me in her. ;)

Rovaniemi is indeed a small town with its own flavour & the main reason why tourists are there, is bcos of the Santa Claus Village, right at the artic circle. Of cos, im there bcos of that too! I was little surprised to see a lot of japanese tourists were there, and the finnish themselves. The funny part was when i was in the queue to 'see' Santa, there were 4 old ladies, prob in their 70s, were in the queue too!! i guess the pic wil turn out reali good as they wil look like they are one family, brother & sisters.

After being in the Santa Claus Village during the day, met up with my host, Pia, and went to a dance aerobic class with her. Learned a routine for Samba & Paso Doble. Although it is only for an hour, and it cost me only 5euros, i felt great! ;) AFter the class, we went into the sauna, just in the ladies room.

Hw i loved Sauna!! it was perfect!! And had my 1st experience of being totally nude in the sauna with others gals... it was a little uneasy at 1st, but its so common here for the finnish. after i settled on my spot in the sauna, i couldnt care less anymore. It is the real sauna!!!!! ;)

Wil post the pictures later, when i get back in dublin. Wil be working on night shifts for the whole week again when i go back on mon.. and wil b on 2weeks leave soon, and im looking forward to the 2weeks as i will b meeting Lily at Amsterdam!! My travelling companion!! :) So wil definitely sort out the pics of Finland ASAP!!

Til then, wil write abt helsinki after this. ;)

Posted by destiny at 8:47 AM No comments:

My Family and Friends